Bone broth is the latest foodie fad - but is it really just posh Bovril?

Bone broth is the latest foodie fad - but is it really just posh Bovril? 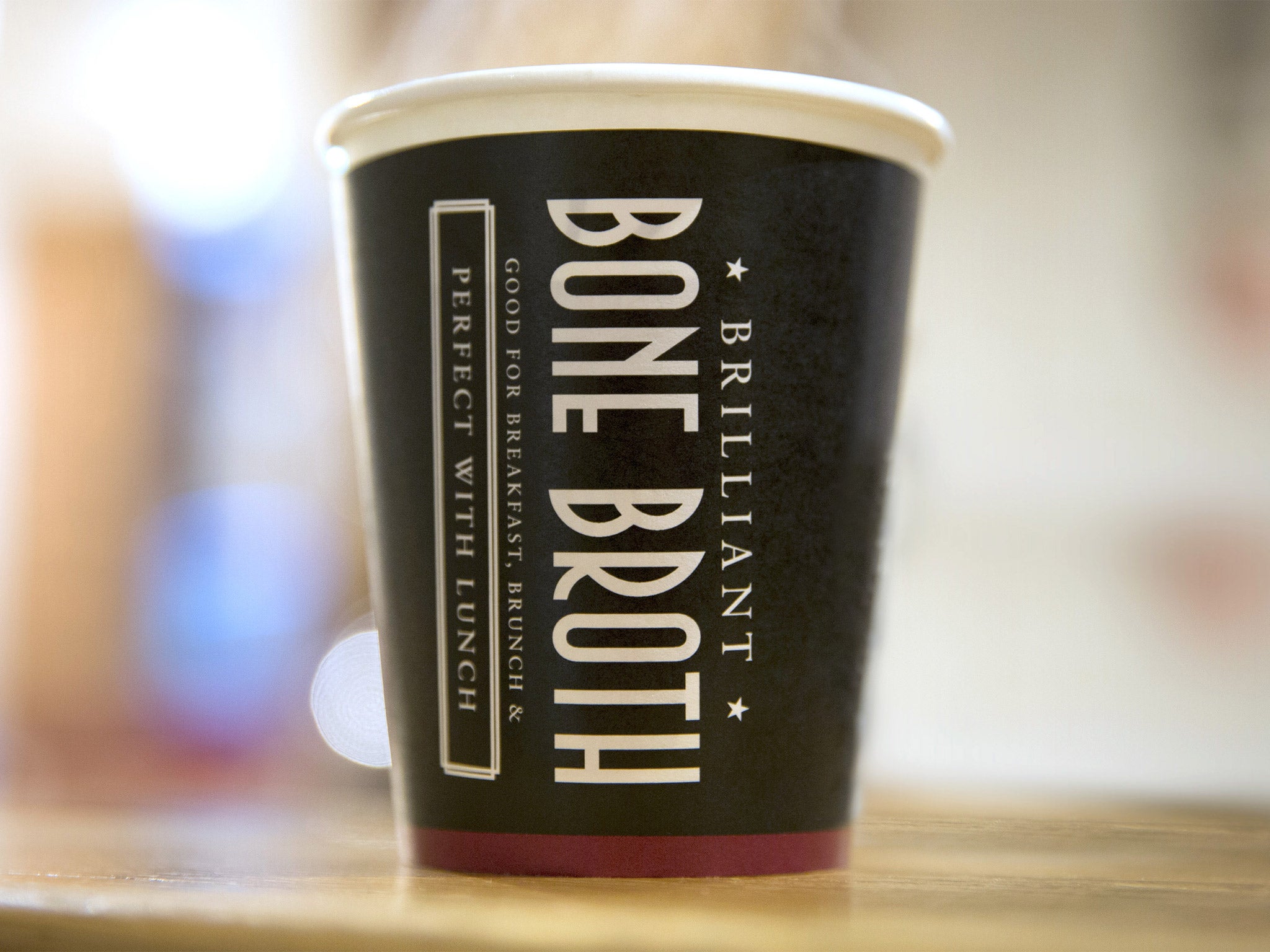 On 1 January 2012, I started the new year with a stock cube supper. The shops were closed and I had nothing else in the house. I boiled the kettle, crumbled the cube and grated in some pepper, making a thin, meat-flavoured broth. It was, as you'd imagine, rather unsatisfactory. One dissolved Oxo cube does not a meal make.

Fast forward four years and stock – or, to use a trendier term, "bone broth" – is the latest nutritional elixir to hit the high street. Billed as "the next green juice", bone broth is said to strengthen immunity, improve digestion, reduce joint pain and even give you shinier hair.

British food writers the Hemsley sisters have since begun championing bone broth in the UK, and recently named it a kitchen staple. Now, lunchtime favourite Pret A Manger has jumped on the bandwagon, trialling a protein-packed version in 28 of its London stores. I decided to venture out for a taste.

I'm met with blank faces in the first two Prets I try. "Bone broth?" the first barista says, with a puzzled look. "Broth made from… bones? No, sorry, not here." Undeterred, I plough on, eventually stumbling upon a branch advertising the little pot of broth on its shelves. I have to collect it at the till, where the servers tell me the new offering is proving popular with customers. One says he's sold around 20 units since it launched the day before.

The broth, which costs £1.95 for a small cup, is made by boiling the bones and meat from grass-fed cattle over an extended period. Although it doesn't contain enough calories to be a meal replacement, Pret Manger says it does make a suitable lunch accompaniment, afternoon snack, or protein hit. Alternatively, it could replace a morning latte – if you don't mind turning up to your first meeting with beefy breath.

I settle down at a window seat, meaty aromas wafting temptingly towards my nostrils. The steaming liquid is thin and mud-brown in colour. I take a cautious sip. Piping hot and salty, the broth fills my mouth. I swallow and take a second gulp, scalding my tongue in the process. It's like drinking posh Bovril. I accompany it with a sandwich and, I must admit, it makes a nice change to kale crisps.

But will it really make my hair shinier? The health benefits of bone broth have long been trumpeted by dieticians. It's said to have high levels of protein, vitamins, minerals, collagen and keratin. Nutritionist Vicki Edgson, who recently co-wrote a book entitled Broth, explains the bare bones.

"Minerals calcium and magnesium, together with the amino acids found in bone broth, are not only essential for bone health, they're also beneficial for hair and nails," she says. "Collagen exuded from the bones benefits the intestinal lining by helping to repair the epithelial cells that make up the lining of the gut."

She says bone broth has anti-inflammatory properties, too, which can help with eczema, asthma, and other inflammatory conditions.

And it's becoming mainstream. "Ready-prepared broth can now be found in most major supermarkets," says Vicki. "Even gyms and fitness centres are now serving broth as a suitable winter alternative to cold juices that may contain antioxidants but do little to replenish a hungry post-workout body before the challenges of the day ahead."

Not everyone's on board, though. Food writer Jay Rayner has been picking bones on Twitter with people who think the broth anything other than ordinary stock.

"Bone broth was never a phrase that anybody had heard until a year or two back. It's a total invention," he tells me. "To make stock you brown some bones and then you boil them. But the bones have to have something on them. They have to have a bit of connective tissue and a bit of meat."

Something tells me "connective tissue consommé" might not sell as well. Rayner also says that any health claims made about bone broth are "ludicrous". "There is no physiological way in which making a stock from bones will have any impact upon your own calcium levels," he says. "The fact that Pret A Manger have leapt on the bandwagon is just infuriating."

"If there's money to be made, they'll make money," says Rayner. That's what it all boils down to.