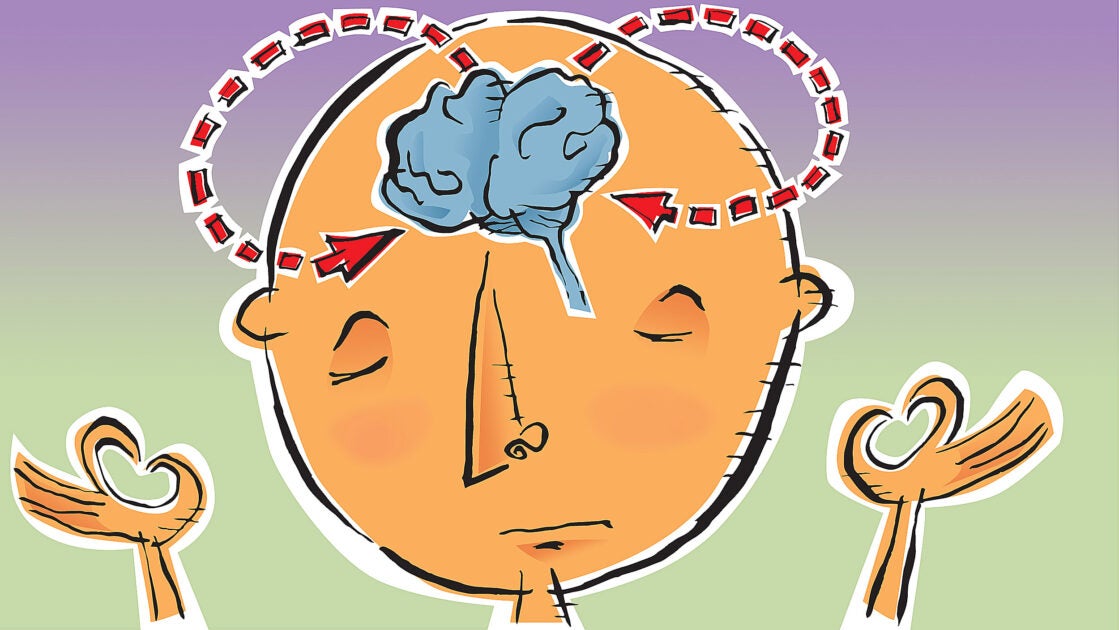 In 2015, 16.1 million Americans reported experiencing major depression during the previous year, often struggling to function while grappling with crippling darkness and despair.

There’s an arsenal of treatments at hand, including talk therapy and antidepressant medications, but what’s depressing in itself is that they don’t work for every patient.

“Many people don’t respond to the frontline interventions,” said Benjamin Shapero, an instructor in psychiatry at Harvard Medical School (HMS) and a psychologist at Massachusetts General Hospital’s (MGH) Depression Clinical and Research Program. “Individual cognitive behavioral therapy is helpful for many people; antidepressant medications help many people. But it’s also the case that many people don’t benefit from them as well. There’s a great need for alternative approaches.”

Shapero is working with Gaëlle Desbordes, an instructor in radiology at HMS and a neuroscientist at MGH’s Martinos Center for Biomedical Imaging, to explore one alternative approach: mindfulness-based meditation.

In recent decades, public interest in mindfulness meditation has soared. Paralleling, and perhaps feeding, the growing popular acceptance has been rising scientific attention. The number of randomized controlled trials — the gold standard for clinical study — involving mindfulness has jumped from one in the period from 1995‒1997 to 11 from 2004‒2006, to a whopping 216 from 2013‒2015, according to a recent article summarizing scientific findings on the subject.

Studies have shown benefits against an array of conditions both physical and mental, including irritable bowel syndrome, fibromyalgia, psoriasis, anxiety, depression, and post-traumatic stress disorder. But some of those findings have been called into question because studies had small sample sizes or problematic experimental designs. Still, there are a handful of key areas — including depression, chronic pain, and anxiety — in which well-designed, well-run studies have shown benefits for patients engaging in a mindfulness meditation program, with effects similar to other existing treatments.

“There are a few applications where the evidence is believable. But the effects are by no means earth-shattering,” Desbordes said. “We’re talking about moderate effect size, on par with other treatments, not better. And then there’s a bunch of other things under study with preliminary evidence that is encouraging but by no means conclusive. I think that’s where it’s at. I’m not sure that is exactly how the public understands it at this point.”